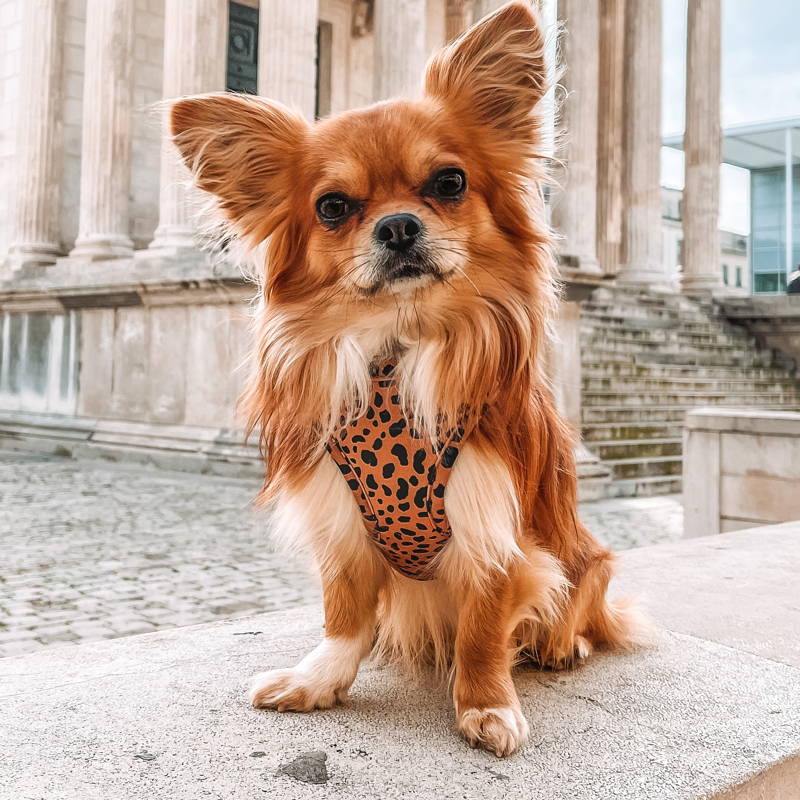 The Chihuahua is a breed of dogs which is the smallest of all. It has a height of approximately 15 to 23 cm on an average, though some may grow to 30cm or even 38cm. The tiniest Chihuahuas bred by breeders are kept small due to the high market price they fetch. The “teacup” size is in great demand.

Due to their diminutive size there was speculation that Chihuahuas are not really dogs but rodents. Many people have pointed out the close likeness in appearance between Chihuahuas and a rodent. There is a legend of how a large rat was mistaken for the small dog.

What started out as a piece of fictitious writing in a satirical online publication generated an entire internet fallacy about the genetic lineage of the Chihuahua.

The article reported that researchers had discovered that chihuahuas were not dogs at all, but the descendants of rodents.

If you think that sounds like rubbish, you are right...it is!

In 2004 an article by the Wately Review claimed that researchers after analyzing the DNA of 85 dog breeds came to the conclusion that the Chihuahua was actually a kind of oversized rodent and not a dog. This led many to speculate if Chihuahuas were actually dogs or rodents.

But, it was a false claim and based purely on a satirical news article.

The Wadley Review stated in 2005 that the Chihuahua was a large rodent and that it was selectively bred for many centuries to resemble a canine. The article stated that Peggy Wilson who was the president of the Chihuahua Club of America said that they used 96 distinct patterns called “microsatellites” in dog’s genes and researchers used this information to compare dogs within the same breed as well as one breed with another.

It should be noted here that The Wadley Review is not based on journalistic merit or any facts and that names, events and places are fictitious. However, this confusion led some people to believe that the Chihuahua did originate from rodents.

People began to wonder whether the Chihuahua was actually a dog or a rodent. When they came to know that they were not raising rodents, they were relieved to find out that they were indeed dogs. Chihuahuas like other dogs are descendants of wolves. In 1904 the American Kennel Club stated that Chihuahuas are a “reputable and recognizable breed” and are of high standards.

The Watley Review of Science and Medicine

This satirical publication describes itself as an organisation that produces articles that are “completely without journalistic merit or factual basis.”

In some ways it may seem odd that there are people out there with so little to do with their lives, that coming up with satirical scientific studies is an adequate way to pass the time.

However, whatever turns you on! The “journalists” at the W.R.S.M. probably found it hilarious to come up with a bunch of rubbish about Chihuahuas being descended from rats rather than dogs.

Good for them. Let’s hope they had fun!

But the way that the fictitious information contained in this online publication made it into general circulation, goes to show how easily false information can take on a life of its own if it is not subjected to appropriate fact-checking.

A quick glance at any post contained in the Watley Review of Science and Medicine (and a quick glance is all you will need), reveals a tongue in cheek publication. It's layout and writing style resembles a Victorian broadsheet, printed on Sepia paper and with various olde worlde-looking drawings.

Like all pseudo-scientific publications, it has all the hallmarks of authority including:

Quotes from authoritative people such as “researchers.”

Quotes from the general public about the findings.

It does, however, have a disclaimer printed in the margin that reads “please read before quoting us in court.”

It's hard to say if this is just another cheeky gag, or an actual attempt to point out that none of the scientific information contained in the publication is, indeed, factual.

The opening paragraph of the Chihuahua story is kind of convincing, in a quasi-scientific sort of way. It describes a research programme that set out to identify genes which may cause diseases in dogs and humans, conducted at a fictitious research centre called the Fred Hutchinson Cancer Research Centre.

The story describes a bunch of supposed data obtained from samples of canine DNA collected from 414 dogs and representing 85 breeds.

“Among other findings,” it says, “the analysis determined that the Chihuahua is actually a type of large rodent, selectively bred for centuries to resemble a canine.”

To quote the publication: “the findings have sent reverberations through the ranks of dog fanciers, who primp and preen their beloved companions for shows and take great pride in their pedigree.”

The article continues in this vein for some length and then moves on to supposedly quote the president of the Chihuahua Club of America: a fictitious person named Peggy Wilson.

“This is clearly going to raise some eyebrows in the chihuahua world,” Miss Wilson apparently told the publication. “It goes against our belief system. People are pretty passionate about their dogs and there is going to be disbelief.

The article carries on by quoting various other so-called reputable sources, making claims about various other breeds, and how this information will be used.

Ho hum...enough about the “Wally Report” which, incidentally, is now defunct. Let's move on to some actual facts shall we.

Similarities between Chihuahuas and Rodents

Round heads - Chihuahuas’ heads are round and apple-shaped, which is similar to a rodent’s head.

Ears - Both animals have shot and pointy ears that are erect on their heads. In addition, their ears are similar to large rats and rodents.

Round eyes - They also have big round eyes that completely melt your heart. Chihuahua’s eyes look more rodent-like rather than dog-like.

Short and stubby tails-For both Chihuahuas and rodents, the tails are short and thin and go up depending on their emotional state.

Tiny body – Chihuahuas are so tiny that they can easily fit in the palm of your hand or in your pocket. No wonder celebrities like to carry them! Their body is so tiny that it is similar to a rodent’s body.

Chihuahuas may seem diminutive compared to other dogs. However, there is nothing diminutive about their lineage.

The domesticated dogs of the Americas are descended from wild dogs that entered North America from Siberia across a land bridge between the Eurasian continent and the North American continent over a period of 4,500 years.

When the land bridge was submerged by the rising oceans, these dogs were isolated on the American continent for the next 9000 years.

When Europeans arrived on the North and South American continents in the 15th century, they brought their own ocean-going mutts with them. As time went on, the ancient, wild lineages of the continent’s dogs were replaced by Eurasian dogs and their local descendants.

When scientists analysed the genome sequence of chihuahuas, they discovered that the breed retains around 4% of the original genome of the wild dogs that ended America all those years ago.

So much for being descended from rats! Chihuahuas are, in fact, descended from some of the biggest, strongest and most impressive dogs that have ever lived.

And although their genetic lineage may be almost gone, the spirit of those ancient wild dogs, that migrated across the Arctic wilderness and entered the Americas, lives on in Chihuahuas to this day.

The American Kennel Club knows what it is talking about when it comes to the authenticity of dog breeds. To the A.K.C., the Chihuahua is “a graceful, alert, swift-moving, compact little dog, with a saucy expression and with terrier-like qualities of temperament.”

They further describe the breed as having originated in the Mexican state of Chihuahua, where the earlier specimens of the breed were found.

So to imply that Chihuahuas were bred from a species of rodent, rather than from strong, capable and 100% real dogs is, to say the least, somewhat insulting to this sassy little breed of dog.

Origin of the Chihuahua

For the sake of clarity let’s take a look at where the Chihuahua originated. Dogs and humans share a relationship that goes way back into history. The evolution of dogs from wolves dates back to thousands of years ago when humans were nomads and hunters.

That was when the domestication of wolves started and humans began “taming” them. Research suggests that humans tamed wolves because they believed that they would make good companions. With genetic evolution that took place over 2000 years, wolves got domesticated and today there are over 150 breeds of dogs.

Research of DNA from domesticated dogs shows that the Chihuahua entered North America around 4500 years ago from Siberia but we’re isolated for the next 9000 years.

Today, the Chihuahua is the smallest dog breed and is named after the Mexican state of Chihuahua.

It was taken note of in the mid 19th century and is said to have been derived from the Techichi which is a small mute dog that belongs to the Toltec people of Mexico.

Today the Techichi breed is extinct either because they were interbred with other dogs to a point that they no longer existed, or as another theory states, the Spanish ate them.

Chihuahuas are an old breed and the earliest record of them was the 16th century drawings that were found in the Yucatan Peninsula. Thus Chihuahuas were probably living in Mexico way before the Aztecs and the Mayans.

Nowadays, there are different breeds of Chihuahuas that vary in color, and coat.

Don’t mistake the Chihuahua’s tiny appearance for meekness. The Chihuahua is very popular because of its outgoing and bold nature and today it appeals to men, women and children. The Chihuahua has a lively personality and ironically, they are great at catching rodents! They need constant training to help them behave well and socialize.

Because of their spicy personalities and cute appearance, Chihuahuas are fun to have as pets. They love activity and are always energetic. Treat your Chihuahua with love and they will make a wonderful pet. Allow them to play with you, socialize with other dogs and snuggle up to you at times.

The conclusion is yes. Don’t let the appearance of the Chihuahua fool you. No matter what their size or how rodent-like they look, Chihuahuas are dogs and have evolved from wolves, not rodents! There is no doubt about it.

How fast can a Chihuahua run ?