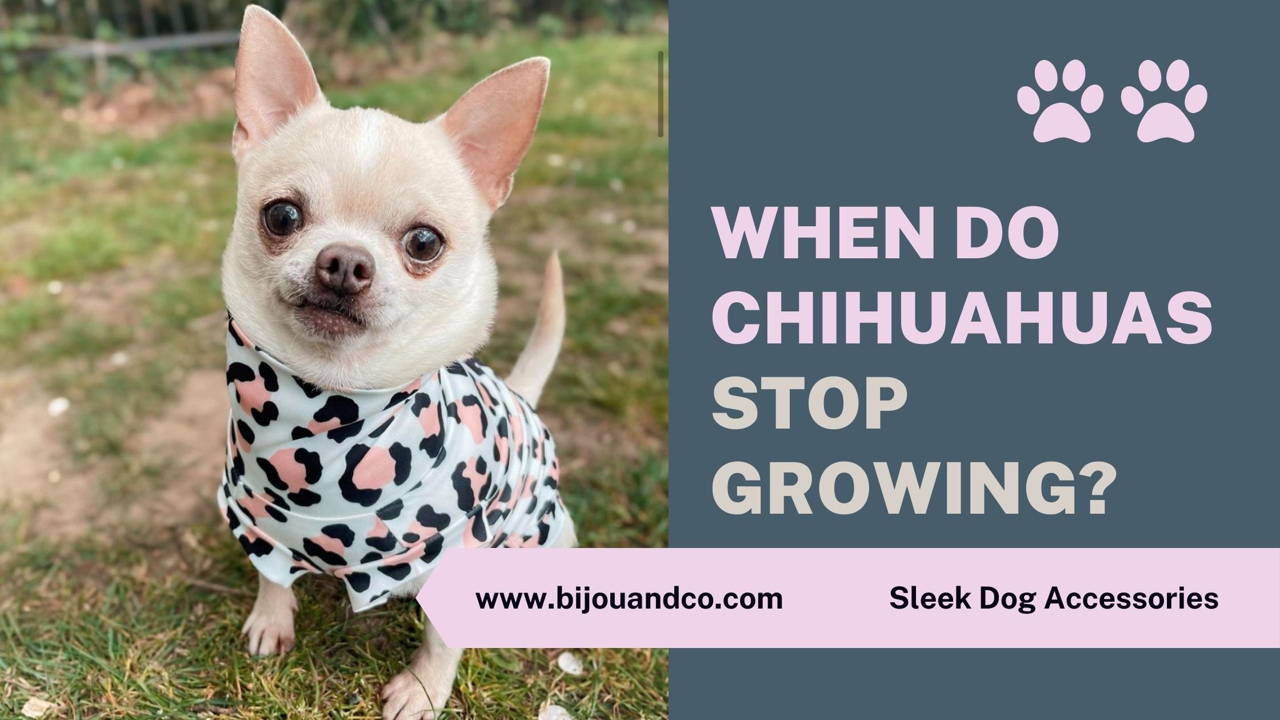 Getting a puppy of any size, shape or breed is exciting, rewarding, and always a fun occasion. Chihuahua puppies are cute, cuddly, and comical as they cavort around your house on new wobbly legs, exploring the world around them for the first time.

But with a dog as small as a Chihuahua many owners find themselves wondering "when do Chihuahuas stop growing?" That's what we are here to find out. With the help of growth charts and breed facts we will break down the growth pattern of a Chihuahua and when you might expect your Chihuahua to reach full size.

When do Chihuahuas reach full size?

Like all babies, Chihuahua puppies grow very quickly. These tiny little puppies may only measure a couple of inches when born, but in a matter of weeks they will quickly approach their full adult size. In fact, the standard growth chart of the weight of Chihuahuas has them reaching their full adult weight by 28 weeks (about 6 and a half months), though further skeletal and cognitive development can happen beyond this age up to 8-12 months.

Because of their small stature, Chihuahuas grow to their full adult height well before they reach a year old, unlike larger breeds which can take up to 2 years to fully develop.

All dogs, including Chihuahuas, have not only physical growth but cognitive growth to go through in their first couple of years, learning how to socialize and behave in an acceptable manner as domesticated pets.

Emotional maturity in Chihuahuas often takes longer to develop than their physical size. It is highly important that Chihuahua owners focus on the correct training during the early socialization stage to avoid behavioral problems.

Newborn Chihuahua puppies are small enough to fit inside the palm of your hand. They'll grow rapidly during their first few weeks, however, often doubling in size while adding 5-10% of body weight daily!

Between 11 and 15 weeks of age your pup will likely experience an impressive growth spurt during this period that may cause them to gain weight quite rapidly!

By the end of 3 months

By the end of three months, you'll be able to see that your Chihuahua puppy has already gained about 30% in weight.

The growth that your Chihuahua experienced in the first few months should slow down now, with most dogs reaching their adult height of 5-6 inches or more. Your pet may still "fill out" but shouldn't gain any significant amount beyond this point.

Like most toy breeds, Chihuahua's typically reach maturity and stop growing by 10-12 months. However you can still expect your dog’s weight to fluctuate depending on his diet or health - he may even lose some pounds!

The benefits of knowing your Chihuahua’s growth pattern

By understanding the full growth pattern of your Chihuahua, you can ensure that their growth is monitored accurately, preventing overweight or underweight puppies. To do this, you will need to have some idea about the growth stages of your Chihuahua, and when they will reach their full height and weight.

If the Chihuahuas growth and weight gain does not remain consistent, it could lead to potential health problems later down the road. All Chihuahuas should grow at a steady pace that can be easily tracked throughout the first 28 weeks (about 6 and a half months) of their life. 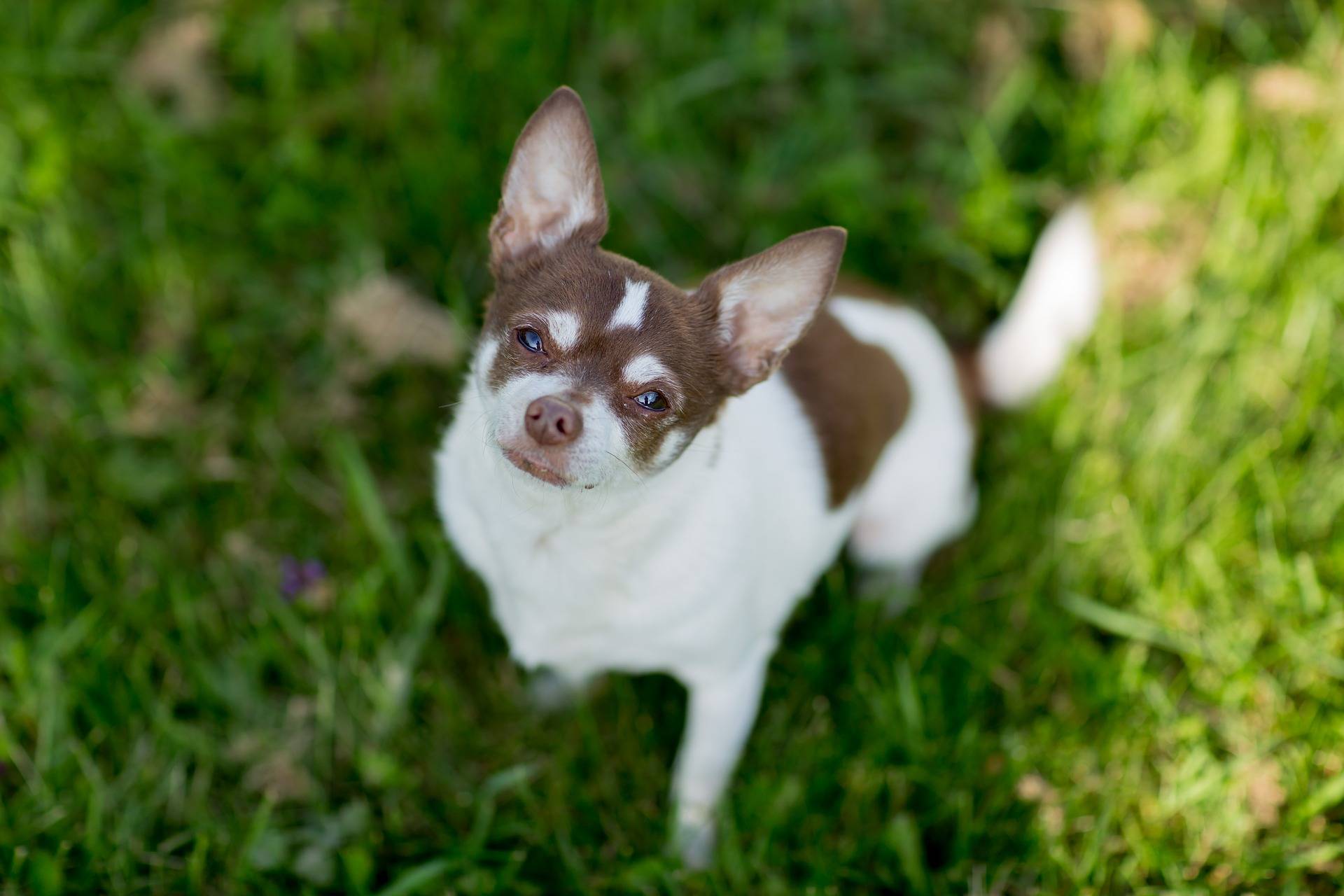 How big do Chihuahuas get?

The average height of Chihuahua from the ground to their shoulders is around 6 to 9 inches. It will usually take 8 to 12 months for a Chi pup to develop from a tiny bumbling, parcel of cuteness, to a fully-grown adult Chihuahua.

The height at which the Chihuahua stops growing is usually in line with their maximum weight gain. Therefore, a heavier adult Chihuahua is likely to be taller. 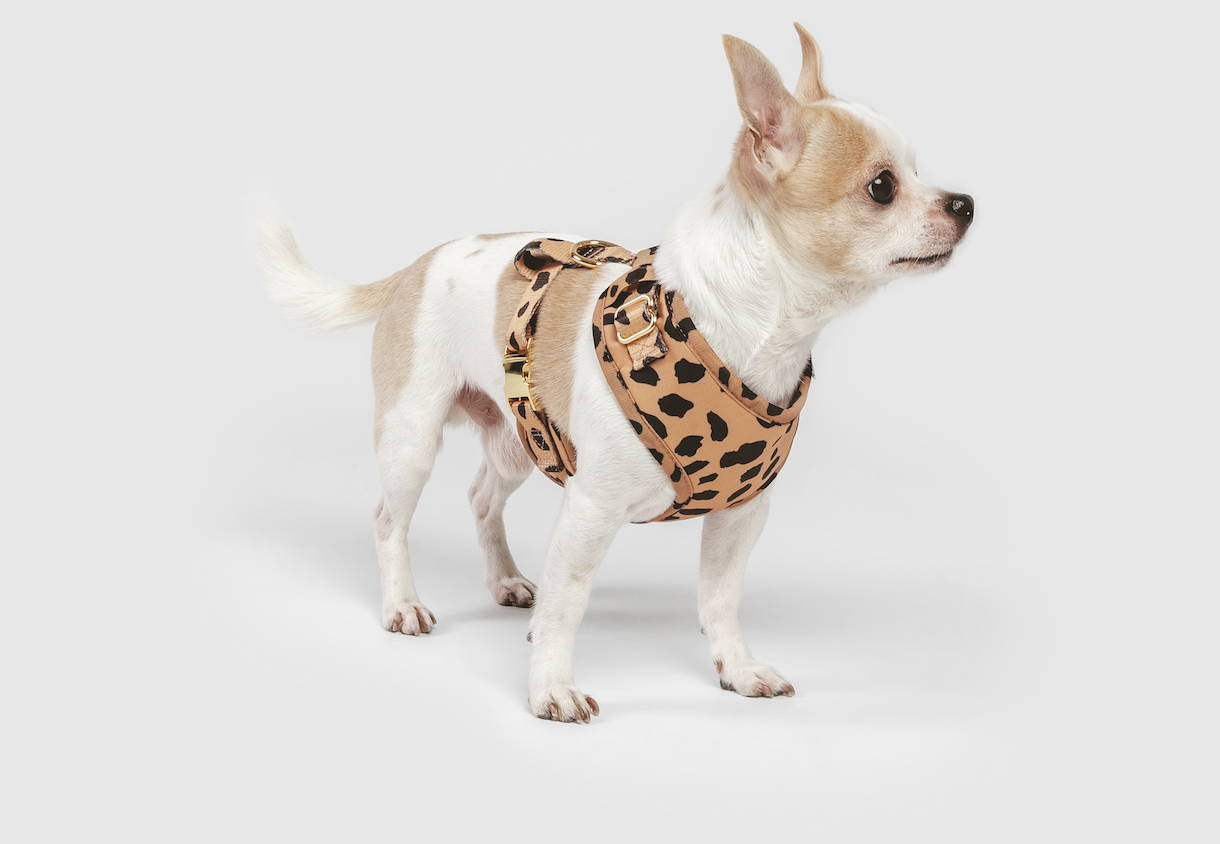 There are no specific growth charts available that reflect the proper growth rate for the height of Chihuahuas. However, we have put below the chart pertaining to the appropriate weight of a Chihuahua. By closely monitoring your Chihuahua's weight you can see whether they are staying within the appropriate limits.

Additionally, you should watch their figure to see if they are showing signs of being underweight or overweight as this could signify whether their body is growing proportionately to their weight gain.

The following chart predicts what your pure-bred Chihuahua pup's adult weight will be based on his current size:

- If you don't already know how much your Chihuahuas weighs, measure him with a digital kitchen scale for new born pups or wait until the mother dog leaves her nesting area before handling so as to avoid being bitten!

- Find age in left column followed by increasing numbers every other row up until reaching 21 weeks where there'll be an empty square ready for estimated mature sizes at either end of these segments (although some may take longer).

- Go ahead and fill them both out 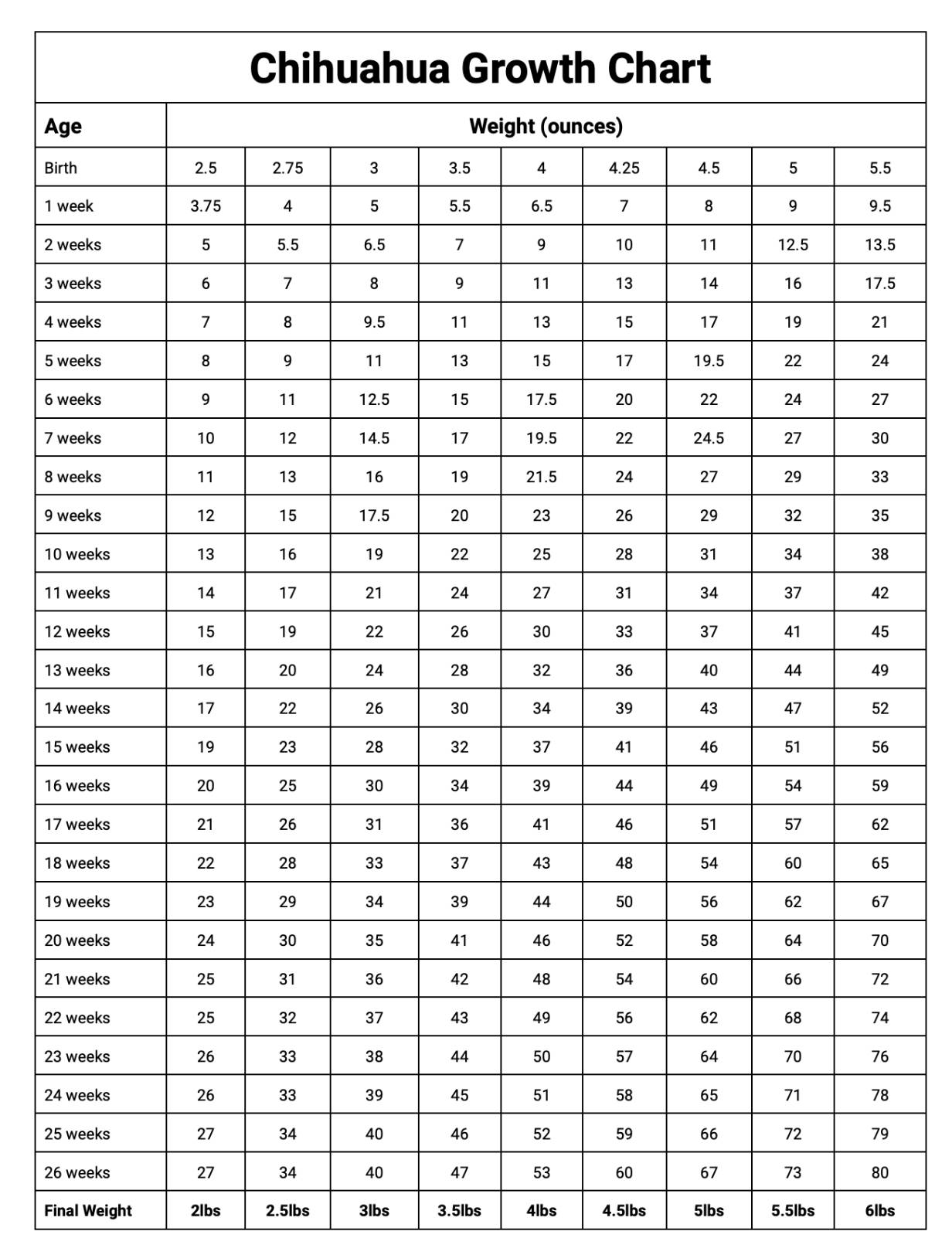 Chihuahua growth according to gender

Most of the Chihuahua’s development and growth will happen before they reach the age of eight months. After this, they will still be developing, but the ways in which they develop will vary according to the dog’s gender.

Male Chihuahuas. As a male Chihuahua grows into adulthood, it will develop muscle mass and the torso will broaden out. Male Chihuahua is typically grown to be slightly larger than females at full size, with males growing to an average of 7 to 9 inches. 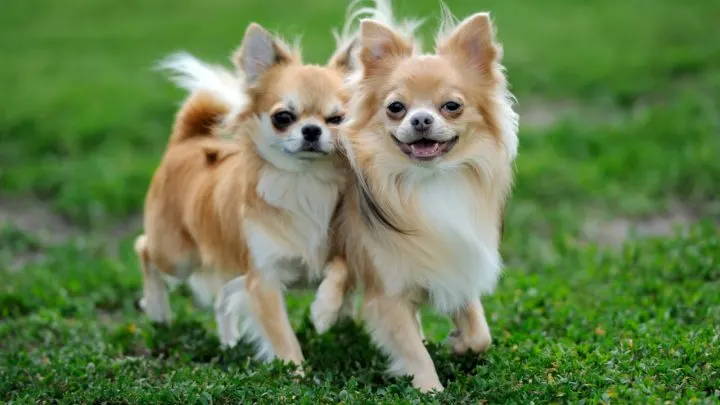 There is a strong color correlation between the Chihuahua’s typically smaller size and when it reaches sexual maturity. In larger dog breeds, it may take more than a year for females to reach sexual maturity. With the average being somewhere between 8 and 12 months.

Chihuahuas reach sexual maturity after as little as four months. This is typical of smaller dog breeds. For this reason, you will need to be paying close attention to your puppy’s development.

If you intend to have your Chihuahua spayed or neutered once they reach sexual maturity but before they have grown to their full height, you need to keep in mind that spaying and neutering can cause hormonal changes that can stunt their growth. 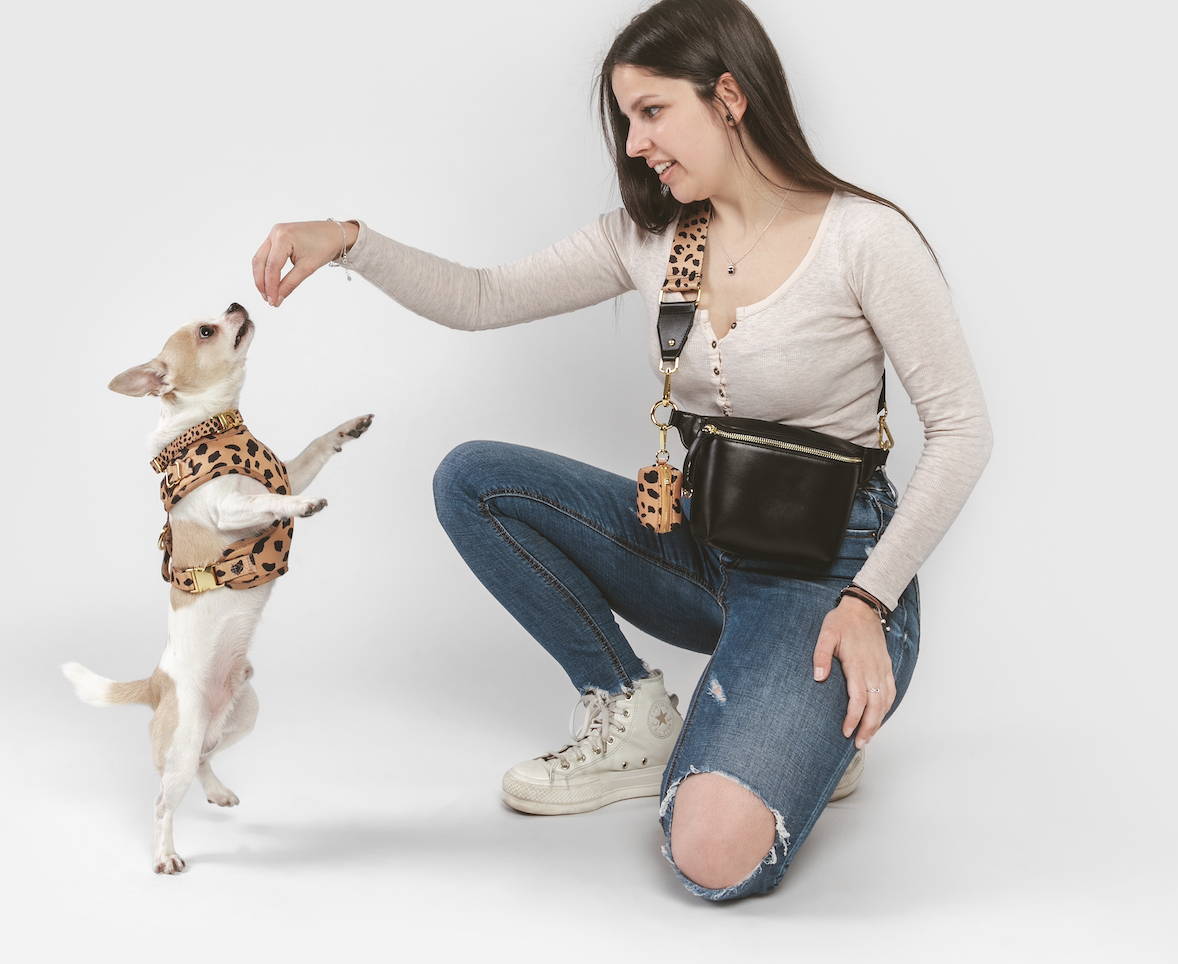 When do Chihuahua puppies stop growing?

The Chihuahua puppy to adult growth period takes between 8-12 months of age. During this time, they will reach sexual maturity, however, it is not advised to breed a female until after she has finished growing to prevent any gestational complications.

When do Chihuahuas stop growing in height?

A full-grown Chihuahua will have reached its maximum height before it reaches a year old. The typical growth time for a Chihuahua is around 27 weeks (about 6 months). Once they suppress this age, they tend to be at their maximum weight and height.

When is an Apple Head Chihuahua full grown?

Apple Head Chihuahuas have a growth cycle that typically matches that of other Chihuahua breeds, meaning they will reach their full size by around 9-12 months. Generally speaking, they will be at their full adult height at the lower end of that age range, however some do grow slightly larger, which can take a little bit longer to account for proper development.

How fast do Chihuahuas grow?

Chihuahuas grow about as quickly as any other breed (relative to their size). Though many people believe that Chihuahuas grow faster than other breeds because their growth period is not as long as that of a husky for example. Small dog breeds tend to take less than a year to reach their full size, whereas large breeds may take up to 2.

What age does Chihuahua stop growing?

A Chihuahua will typically stop growing at around 8 to 12 months of age. Some may reach their full height earlier and some may take a little bit longer, however the 8 to 12 months' time frame tends to fit the growth cycle of most Chihuahuas.

Where do Chihuahuas come from?